Recently, Biomedical Engineering Professor Wu Changfeng’s research group has made new progress on biomedical sensors by developing an ultrasensitive Pdot transducer for real-time, wireless in vivo glucose monitoring via a smartphone. The results were published in the American Chemical Society’s journal ACS Nano (Impact Factor 13.942). Sun Kai, a Ph.D. candidate from Jilin University was the first author, and SUSTech was the sole communication unit.

As one of the world’s biggest health concerns, diabetes can cause numerous complications in heart, kidney, retina, and neural system. Since 11% of the Chinese population are diabetic, and 36% are prediabetic, Professor Wu took part in an interview to elaborate on the research’s significance for diabetes patients and the massive prediabetic population in the country.

“Continuous detection of blood glucose level is essential to manage diabetes progression and treatment, which involves a glucometer and finger-pricking for many diabetics. The measures can cause discomfort or pain, and they cannot monitor the continuous changes in blood glucose level.” said Professor Wu: “For severe diabetic patients, they need subcutaneous electrochemical sensors to keep track of real-time fluctuations in their blood glucose level. Though electrochemical sensors can provide valuable, comprehensive data, they have several drawbacks including in vivo sensor degradation within a week (which requires replacement and reimplantation), the poor response at low glucose concentrations, the pain of insertion, and risk of infection from the electrodes.”

Optical methods for glucose sensing have the potential to overcome the limitations of electrochemical sensors. However, these schemes have not had the clinical success of electrochemical methods for point-of-care testing because of the limited performance of optical sensors and the bulky instruments they require. Professor Wu’s research team saw the advances in nanotechnology that could oﬀer solutions to overcome the problems with current optical glucose monitoring devices. As promising ﬂuorescent materials, semiconductor polymer dots (Pdots) have attracted considerable attention for their applications in biological imaging and biosensors because of their high brightness, excellent stability, and biocompatibility.

Wu Changfeng et al. have recently developed an optically bright Pdot oxygen transducer that consists of an oxygen-consuming enzyme for sensitive detection of small-molecule substrates. The transducer−enzyme assembly after subcutaneous implantation provides a strong luminescence signal that is transdermally detectable and continuously responsive to blood glucose ﬂuctuations. The team eventually designed an ultrasensitive Pdot transducer for wireless glucose monitoring via a smartphone. By using the longer lifetime palladium porphyrin complexes, the Pdot transducer exhibited a signiﬁcantly higher sensitivity in both in vitro and in vivo glucose detection. With the ultrasensitive transducer, it was possible to diﬀerentiate clearly between euglycemia and hyperglycemia using luminescence images taken with a smartphone camera.

Wu et al. further developed an image-processing algorithm to decompose the ﬂuorescence image via the RGB model. Based on the algorithm, a software application was developed and installed on a smartphone. They demonstrated a wireless, real-time, dynamic glucose monitoring of blood glucose level using the implanted transducer and the smartphone. The miniaturization of the optical monitoring platform can promote the innovative development of optical monitoring approaches in diabetic healthcare. Furthermore, by taking advantage of the mobile platform, the blood glucose data can be stored and uploaded to a database for personal healthcare, and this can aid the understanding and prediction of public health status through big data analysis.

“It’s taken us six years to achieve a breakthrough in the project, which means the article’s first author Sun Kai finished his one and only time-consuming project right before graduation.” said Professor Wu. “Despite its creativity and innovation, our project has only completed the first phase. We have only applied our in vivo glucose monitoring to lab rats, and we hope our project will enter the clinical trials soon by improving sensors and other materials. We still have a long way to go.”

When asked about the background of his research, Professor Wu Changfeng added: “Despite coming from different universities in China and United States, most teammates are my long-time friends and colleagues. I would like to specifically thank Sun Kai, who was my student when I was working at Jilin University. Moreover, one of the teammates Daniel Chiu (Professor of Washington University) helped me with the idea of in vivo smartphone glucose monitoring via an ultrasensitive Pdot transducer. Given the technological development at the time, the project was put on hold. But when I came back to China, the technological advancement and friendly environment for research prompted me to pick up the research again and achieve a breakthrough.” 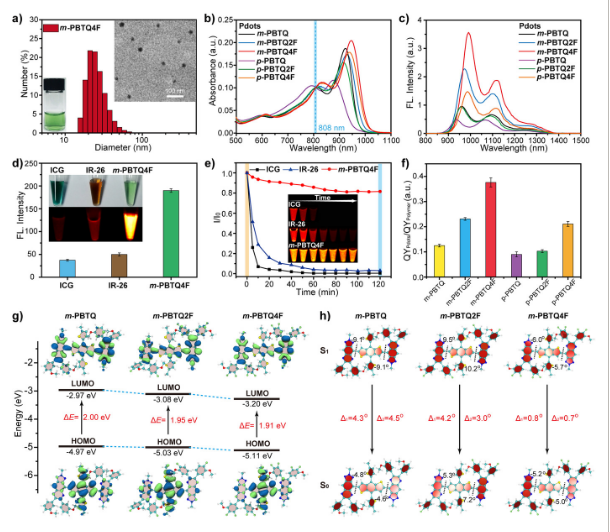